What is Bike Party?

Changwon Bike Party is a group bike ride open to any and all bike riders and Nubija subscribers. It happens the 2nd Saturday of every month. Every Bike Party has a different starting point and a different route and is typically around 12-20 KM. Also every ride has a costumed theme! Bike Party is about engaging with your biking and local community. Bike Party allows us to explore and engage with neighborhoods and even cities that we might not explore or engage with otherwise. Bike Party is first and foremost a PARTY! There is music, and costumes and all kinds of celebrating!! So dress up and get on your bikes and ride!!!

Here is a video I made of what a bike party looks like: East Bay Bike Party 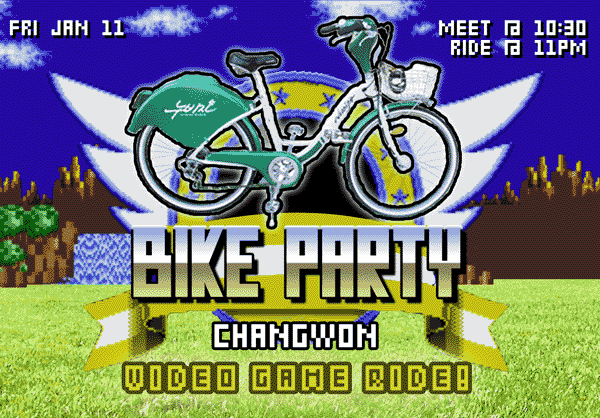 We’ll be starting off at the Homeplus in Changwon. We will ride a total of 13km (8 miles) through Changwon Moonsong University, where we will take a short break. Then will ride to the famous House of Changwon, then to Changwon Jungang Train Station and then to Fountain Park in Sangnam. Bring your warm clothes and your video game spirit!!!


Dress like your favorite video game character and join us on a cool January night!

Here is our route:

We will start at Homeplus in Changwon (on Changwon-daero near the Bus Terminal) It's the Red Flag on the map. Meet at 10:30PM. Ride leaves at 11PM.

Our first stop will be at Changwon Moonsong University. (Flag  1 on the map)


Our second stop will be at the House of Changwon. (Flag  2 on the map)


Our end point will be at the Fountain Park in Sangnam-dong. (The Blue Flag on the map)